Escaping Hitler: A Jewish Boy's Quest for Freedom and his Future 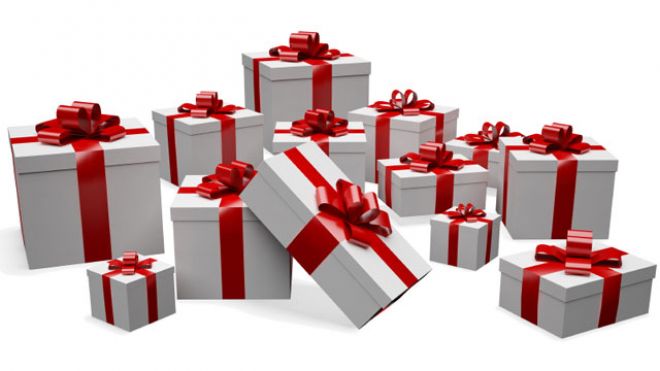 I don’t think I can ignore CHRISTMAS any longer!!!  If you are considering gifts for the relative or friend who has everything, or someone who loves to read, especially if they are or have been Norwich residents, then Joe Stirling’s biography should be well received….  you can order a hardback copy, signed by both author and subject direct from me by contacting me at phyllida.scrivens@icloud.com.  I can take credit and debit payments on the telephone and I will package the book up safely, mailing it out by first class post.  The price is £19.50 plus £4 postage and packing.  I look forward to hearing from you! PLEASE SHARE!!

I don’t think I can ignore CHRISTMAS any longer!!!  If you are considering gifts for the relative or friend who has everything, or someone who loves to read, especially if they are or have been Norwich residents, then Joe Stirling’s biography should be well received….  you can order a hardback copy, signed by both author and subject direct from me by contacting me at phyllida.scrivens@icloud.com.  I can take credit and debit payments on the telephone and I will package the book up safely, mailing it out by first class post.  The price is £19.50 plus £4 postage and packing.  I look forward to hearing from you! PLEASE SHARE!!

I was delighted and honoured when Attleborough Heritage Group asked me to provide photographs and text for its exhibition on 28th October showcasing nuptial memorabilia and gowns from weddings held in St Mary’s Church Attleborough during the past seven decades.  These were displayed in St Mary’s while  the church hall hosted a Wedding Fair.  During the evening there was an illustrated talk from the archive and records of AHG with a buffet supper.  Many thanks to them for including Joe and Jean’s story.  Here is the poster they produced along with the appropriate extract from Escaping Hitler.

Today is Joe’s 93rd birthday.  I called into his home to take him some chocolates (he is a self-confessed chocoholic) and found him in good form, looking forward to a family dinner tonight at an undisclosed location.  Wishing to record the moment I tried some selfies.  Why is it that I can never make them work like the youngsters do?!  But undeterred I carried on and I think these might make you smile! 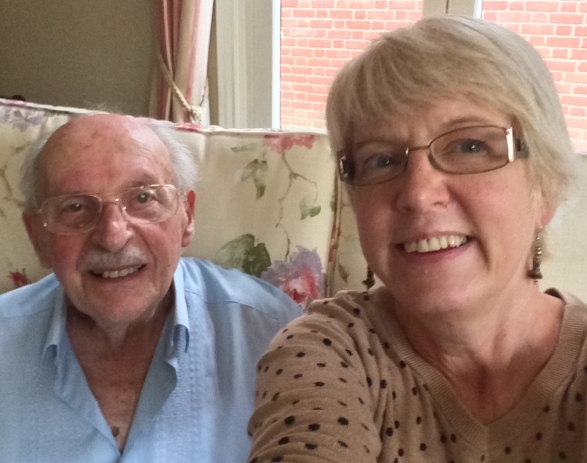 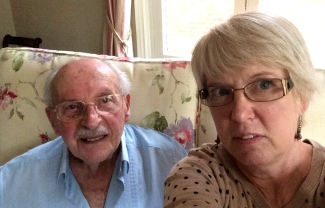 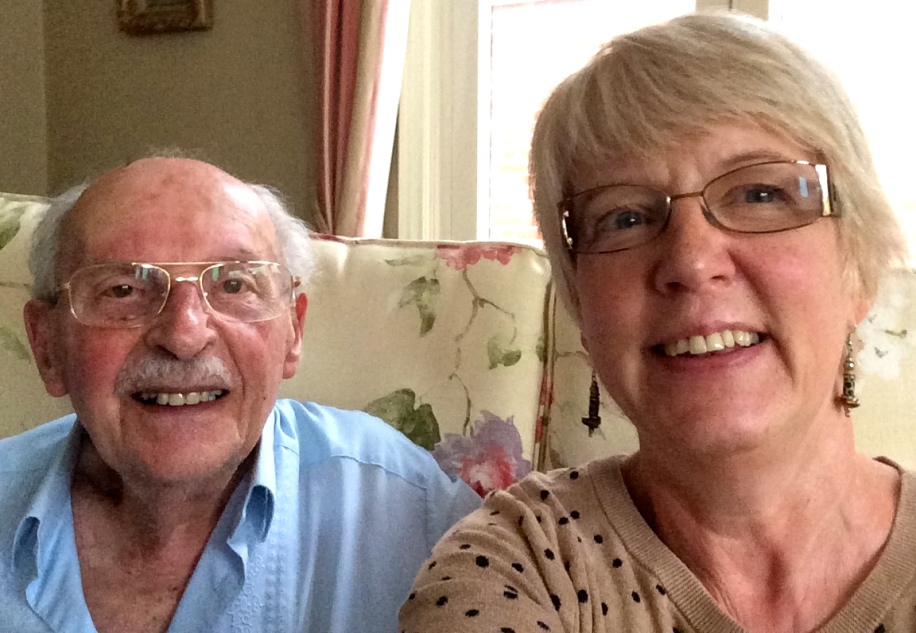 Mindful that in early November Joe and I will be undertaking our final speaking engagement of 2017, to the good ladies of the Hopton-on-Sea Women’s Institute, I thought I would take a look through our visits since Escaping Hitler was published in January 2016.  I was amazed at the number of groups I/we have spoken to, resulting in nearly 300 signed books sold following the talks.  If you then add in sales directly from book exhibitions and individual readers approaching me online or via the telephone, total direct sales amount to 891 and counting!  Unbelievable.  I thought you might be interested in seeing the list of talks, the vast majority of which were in Norwich and surrounding area. (Photo taken at Norfolk Record Office on 8th February 2017) Thanks to all those who have invited us.  We  already have 11 dates in the diary for 2018!

It was a red letter day yesterday in the life of Joe Stirling when we met for lunch with Dr Hubert Becker from Friesland on the North Sea coast of Germany.  His good friend Neil Jordon was hosting Hubert for a few days in Norfolk, and they took the opportunity to arrange a first time meeting with Joe.

Hubert was born in Nickenich, Joe’s home village in the Rhineland, in 1963 and when I was writing Escaping Hitler, Hubert was in touch with me, sending photographs of his relatives in the village and retelling anecdotes from his mother who still lives there.  Some of these now appear in the book.  Hubert’s father was Heinz Becker, a boy in Joe’s class at school (Joe was then Günter Stern) and his Uncle Peter was the best friend of Günter’s father Alfred.  Are you following this?!  Keep up!  Peter appears on a photo that I show at every public talk – he is the second from the left on the plough. Peter died in 1973, having been the Mayor of Nickenich, two days before his Golden Wedding celebration.

Young Heinz appears in the Nickenich village school photo from 1932 – he is the one in centre at the front with the pudding basin fringe! (Günter is seated, front, far left in white socks)  In his adult life, Heinz felt guilty about the fate of the Sterns during the Holocaust and how his schoolfriend had to flee to England to escape Nazi atrocities. As his life was coming to an end in 2000 he made his son Hubert promise to seek out Joe Stirling and ask his forgiveness for how the village failed to act during the darkest hours of Kristallnacht.

And yesterday in Loch Fyne in Norwich, Hubert was able to fulfil that promise. 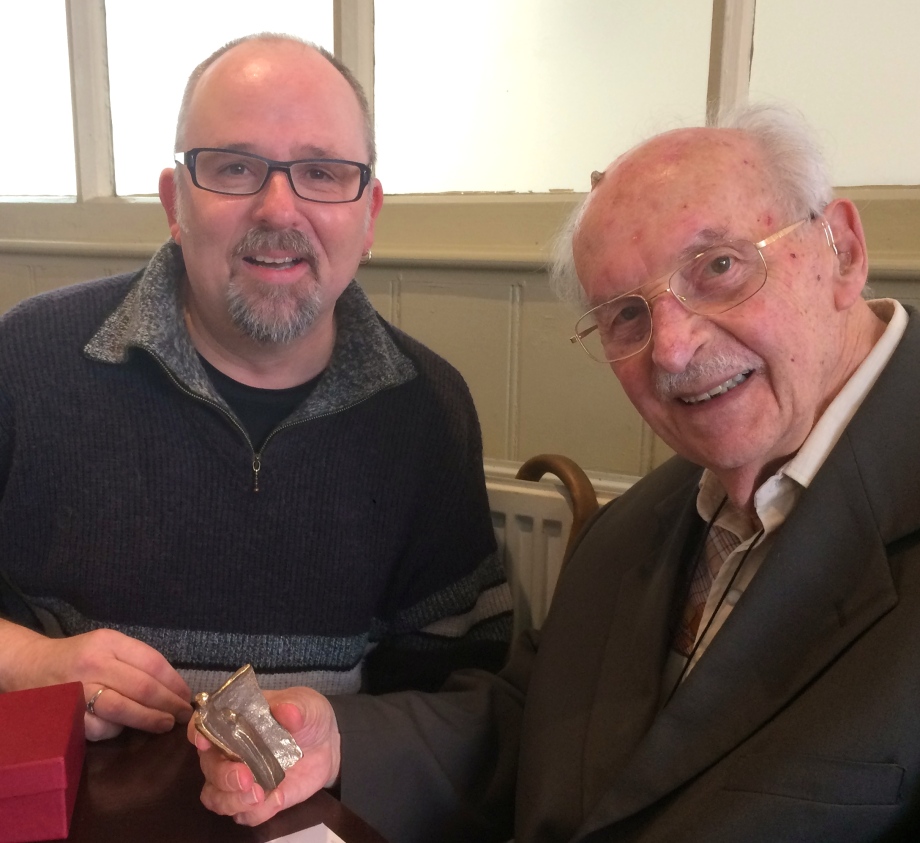 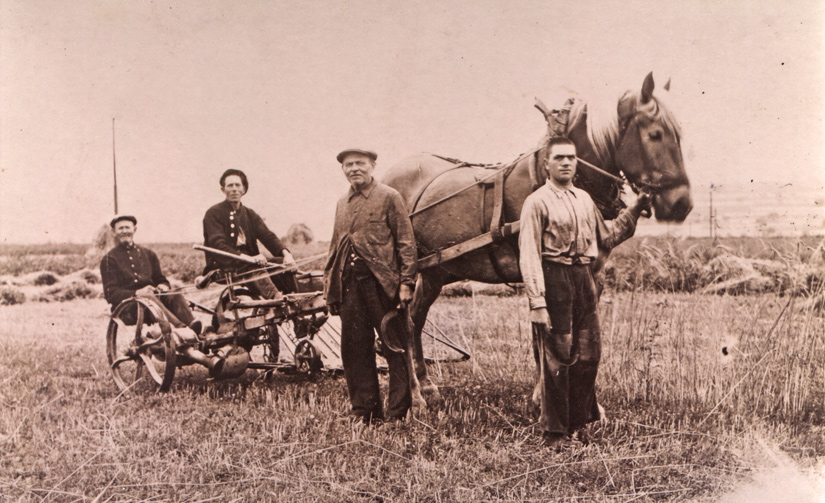 On Wednesday this week, 23rd August 2017, Joe and I rolled up to the award winning Brooklands Care Home in Drayton, just outside Norwich, to fulfil our engagement to speak to residents and staff about Escaping Hitler.  This was our first venture into such a community and to be fair, it was not without its challenges, but we received a wonderful welcome, the book cover was on display everywhere we looked, there was a good group of people to address, and everyone was engaged while Joe gave his 30 minute address about his childhood in Nazi Germany.  I was even given flowers and Joe received a bottle of fizz as a thank you.  Book sales were brisk and we came away thinking what a wonderful home it was for those who can no longer care for themselves.  Our thanks to the manager and her staff for being so attentive and thoughtful. 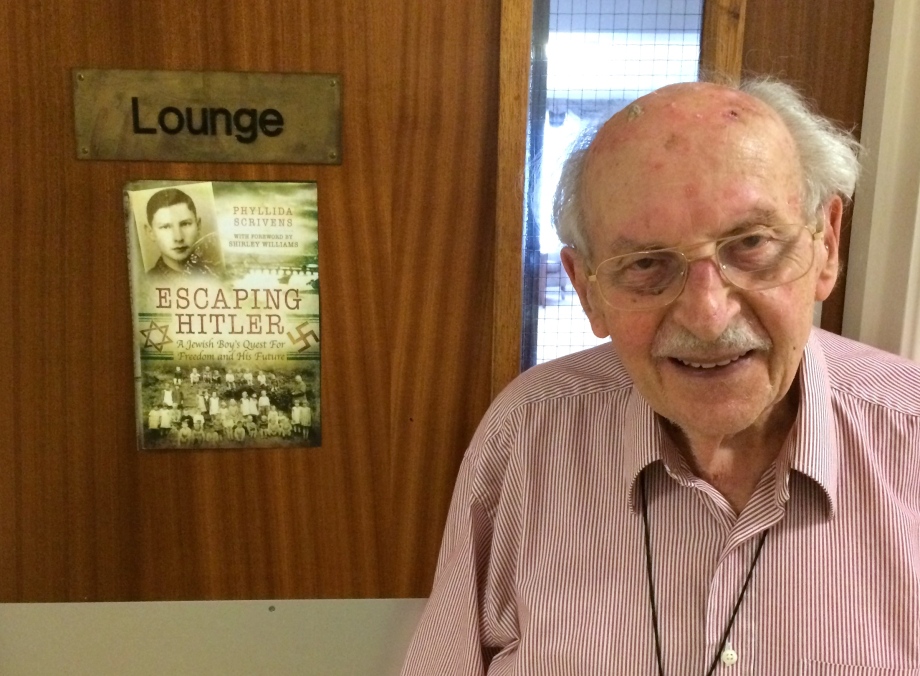 Yesterday, Saturday 8th July 2017, on a sunny lunchtime, I was in the audience for a performance of ‘Come Yew In: A Proud History of Strangers in Norwich’, a lively 90 minute review featuring music and dance.  This new production from theatre company The Common Lot was part of the annual Lord Mayor’s Celebration weekend.  Director Simon Floyd had approached Joe to ask if his story might be included in the drama.  It was wonderful to see his story, so familiar to me, being communicated via a different media, so sensitively capsulated in such a brief moment.  Here is the video footage I took so that you could share the moment.

The summer season is  ahead and normally our presentations and public speaking events would be drying up.  Not this year!  18 months after the publication of my debut biography Escaping Hitler: A Jewish Boy’s Quest for Freedom and His Future (Pen and Sword Books 2016 & Skyhorse Publications New York, 2017), our diary has a further six engagements to September, four in the autumn and three in 2018!  This is mainly because Joe is so compelling when at, nearly 93, he tells his own story to audiences all over Norfolk.  For those who have not yet seen this film, do take a look and you will see what I mean!  For details of how to buy your signed copy direct from the author, do look at the menu section of this blog.

I am delighted to have been invited to sign copies of my book Escaping Hitler at the historic Maddermarket Theatre in Norwich on Saturday 19th May on the opening weekend of ‘Kindertransport’ a play by Diane Samuels. Recently Joe Stirling, the subject of this biography of a Kindertransport boy whose destiny was to become Sheriff of Norwich, visited rehearsals and spoke with the cast about this childhood experiences in Nazi Germany.

Signed copies of the book will be available throughout the run (19 – 27 May), although as I am currently completing my next book, I will not be able to attend the theatre every night.  If you live near Norwich and would like to see the play, take a look at the Maddermarket website at maddermarket.co.uk.

As the clouds of war gather in 1930’s Germany, a desperate mother forces her nine year old daughter onto a train, sending her out of danger and into the arms of strangers.
In peaceful, suburban, 1980’s England, a proud mother prepares to say farewell to her grown-up daughter, as she cuts the ties of childhood to leave the family home.
Then a chance discovery opens an unhealed wound.

I look forward to meeting the cast and the audiences.  Joe’s experiences should certainly complement the text of the play.  This photo shows Joe with the cast. Thanks to the Theatre Manager Rebecca for arranging the book signing.  I am looking forward to it!