Taking a break from the writing for a few days to enjoy Christmas with the grandchildren in Surrey. But just this morning the postman brought me something exciting – a programme from the Norwich events held to celebrate the Festival of Britain in June 1951. Wonderful original source material to add authenticity to my account of Joe and his family moving to Norwich and him living in the city around this period.  Some of the advertisements are fabulous – look at the beautiful old buses and the two Norwich hotels, one now gone but the Maids Head is still going strong.  Happy Christmas and a splendid New Year to all my followers…. 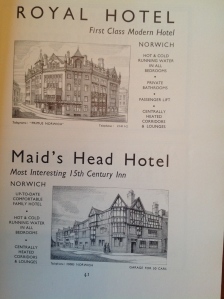 My grateful thanks to Richard Fowle of the Wymondham Town Archive for permission to use these two wonderful photos of the factory workers at Briton Brush Company during the 1930s.  Joe’s wife Jean Skitmore worked there for a short while as a young woman before WW2 and once he had been demobbed, Joe took a job there in the Accounts Department.  The biography is coming along – up to 1955 and counting…. 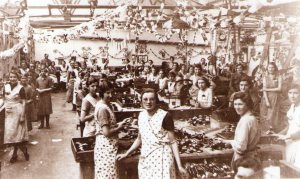 This time last year it was the 75th Anniversary of the first Kindertransport train arriving in England from Nazi Germany.  Seven months later fourteen year old Gunter Stern escaped Hitler using the same route.  Victor and I took Joe to see a performance of Suitcase1938, an interactive promenade play about the Kinder, in Harwich during late November 1939.  The cast were delighted to meet a real refugee and he really enjoyed his day.  Victor and I then took two of our best friends (Judith’s father was also on the Kindertransport) to see the final performance at Liverpool Street.  This can be now be viewed on their website at http://www.suitcase1938.org or via the youtube link below.  Look out for Victor, me, Judith and her husband David, all singing along at the opening of the piece (1 minute 12 seconds!). It was a wonderful experience on both occasions and the video is well worth a view.